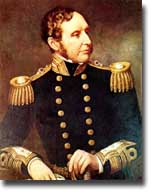 Robert FitzRoy was born on July 5, 1805 in Bury St Edmunds. As a British naval officer he commanded the famous HMS Beagle in the surveying expedition to Patagonia and the Straits of Magellan (1823-36), carrying Charles Darwin as naturalist for the last five years. Like Darwin, he wrote a narrative of the voyage.

He was governor of New Zealand from 1843-1845 before he became chief of the new meteorological department of the Board of Trade in 1854. As hydrographer and meteorologist he instituted a system of storm warnings, based on synoptic informations that remained in use for over a century. FitzRoy initiated to exchange meteorological data, notably with the French, and published the first regular daily weather report on September 3, 1860. He died by his own hand on April 30, 1865 in Norwood.